Progress in the Works 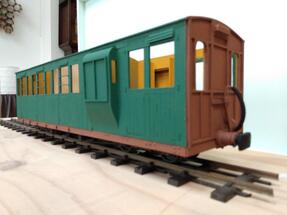 Ffestiniog Railway Van 4
​
Started during the depths of lockdown, this carriage is over the halfway line now, I think. With the exterior almost complete, it now needs droplights, interior detail, figures and lettering adding before it can be varnished and the final assembly carried out - I'm hopeful that might take place in the spring so that the carriage can run during the 2022 summer season. 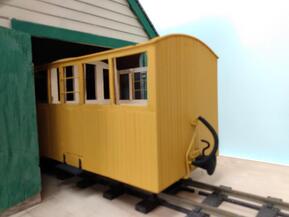 Seemingly developing at a similar pace to Van 4, there's something odd going on with this one - even more odd than that yellow livery. It spends most of its time hidden in the carriage works, although I was able to take this snap as it poked out of the doors one afternoon. It looks almost like a conventional Welsh Highland Ashbury carriage, but the window and door arrangement doesn't match any known drawings... Very strange...

All will be revealed, maybe... 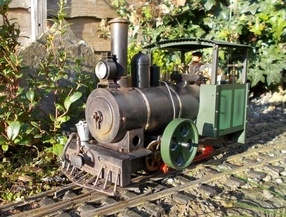 Daisy
​
An "on and off" project which will be carried out bit-by-bit while the loco remains in service. So far Daisy has gained the Baldwin's old headlight, a Swift Sixteen cowcatcher, a little repainting and some weathering. I've started work on a tender, and when that's done (it could be a while!) I'll repaint the whole loco in a yet-to-be-decided colour scheme. 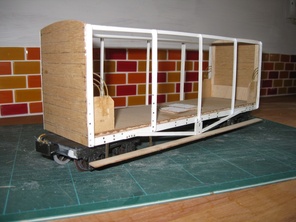 In every shed on every heritage railway in the country lurks a project that's been there for years  - perhaps because the volunteer workforce have lost interest, because parts have been lost, or because the line's priorities have shifted elsewhere. This one's mine - this photo was taken in 2010, and nothing's changed since.

The time may finally have come for my Hudson toastrack build though - since completing the line I've found that I could really do with some shorter carriages, because my run-round loops can't cope with full-length trains of longer ones. Perhaps by next summer this carriage will finally leave the gloom of the workshop?
Powered by