The real Welsh Highland Railway of the 1920s operated a small but varied fleet of carriages, borrowing rolling stock or whole trains from the Ffestiniog as necessary too. I'm gradually creating a representative carriage fleet using a combination of kit and scratch-built vehicles. The aim is to eventually have around 20 carriages, each one different from all of the others, if only subtly so. Given that each of the larger carriages takes me about 6 months to build, it will be a gradual process...

The existing fleet is listed below, under the numbers allocated by the 1922 Ffestiniog and Welsh Highland combined numbering scheme. 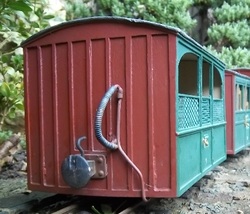 Known as the "Zoo Car" on account of the mesh sides in the lower half of the large open windows, a replica of the original carriage forms part of the current Ffestiniog Railway's "Colonel Stephens"-era train.

My model is one of my earliest 16mm-scale scratch-builds and is constructed from plywood around the chassis of an old Triang "Big Big Train" coal wagon. At some point it will be joined by another open carriage, one of the "port hole" type, with circular ventilators in the ends. That will allow Number 1 to be temporarily withdrawn from service for a few upgrades, including an attempt at the ornate cut-out details that are a feature of the real thing. 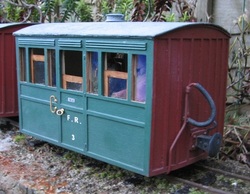 Another "Bug Box" (or "Small Birmingham" as they were originally known), this one an enclosed third.

The model is of the same vintage and construction as the zoo car - a further example is planned but with "matchboarded" lower sides, recreating repairs that kept the originals running in the 20s and 30s. 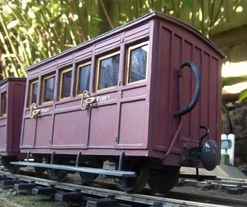 In 1868 the Ffestiniog took delivery of a second batch of 4-wheeled carriages, this time from the Ashbury Railway Carriage and Iron Company. They were the same height as the Bug Boxes, but had conventional floors above the wheels, making them horribly cramped. They didn't last long in Ffestiniog terms, but some survived as huts on the Welsh Highland. That was to have been the fate of my models but in the end I couldn't bring myself to do it, so they've kept their wheels and are assumed to have been retired to the Clarach Branch to see out the rest of their days! 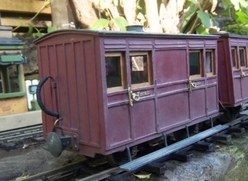 All but one of the 4-wheeled Ashburys were third class - this is one of those. With fewer windows than Number 10, this one must have been even less pleasant to ride in! My passengers certainly seem to think so, because there are none on board...

The real Carriage 14 didn't look like this (it was a four-wheeler), and neither did anything else that ran on the old Welsh Highland. This model's not a complete figment of my imagination though, it shares many characteristics with the Ffestiniog's bogie carriages, and it runs in their place on my line. In my imagination it's an earlier prototype constructed before those - in reality it's a short version that will cope with my tight curves and is a "Ffestified" version of the IP Engineering kit. 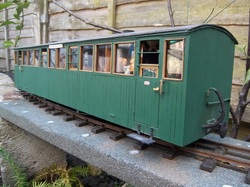 In 1927 the Welsh Highland converted saloon number 23 into a licensed buffet car, adding a rather crude partition complete with a serving counter and tea urn. Railway historian and preservation pioneer Tom Rolt rode in the carriage the following year, describing his experience in the book "Lines of Character":

...at Beddgelert, with the long laborious climb over the foothills of Snowdon still to come, an additional burden awaited Welsh Pony. This was the celebrated Buffet Car which, in the hope of attracting tourists had been converted from one of the standard eight-wheeled carriages. It stood in a siding; its simmering urn presided over by a plump and affable Welsh Woman. 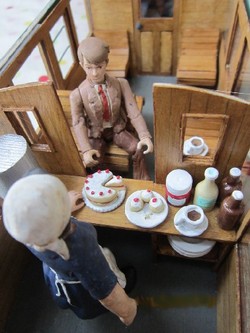 When this remarkable vehicle had been attached we moved into it to be served coffee and biscuits as the train crawled up the long ascent. What with the uneven draw-bar pull of the labouring Welsh Pony and the super-elevation of the sharp curves, to control a full cup successfully would have taxed the skills of an equilibrist. Most of the coffee soon found its way into the saucer, if not further afield, but I'm glad to say I patronised this courageous attempt to provide main-line luxuries on the two foot gauge.

My model, scratchbuilt in plywood on Big Big Train bogies depicts the carriage on that very day. It is complete with Tom himself sitting in the third class compartment with his coffee and the "plump affable Welsh woman" with her urn, cakes and bottles, carefully sculpted for me by my wife. The interior detail is barely visible without peering in very closely, but it's nice to know it's there... 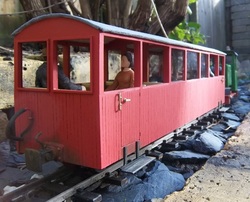 The NWNGR's observation carriage arrived in 1891 and was always regarded as the pride of the carriage fleet, particularly after it had conveyed Liberal Prime Minister William Gladston - and acquired the nickname by which it has subsequuently been known.

I used an old IMP kit as the basis for my model but ended up using my own materials and techniques for most of it anyway. Although it's not known for certain what colour the carriage was painted in the 20s, it seems likely it retained the vermilion paint applied for the WHR opening. By then it wasn't quite as well-appointed as it had been earlier in its life, but it still looks rather smart among all the green carriages. And - even though he'd been dead for years before the Welsh Highland came along - Gladstone himself is still to be found riding "his" carriage... 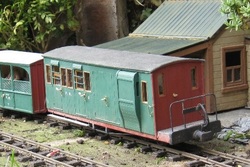 The Ffestiniog Railway's Van 2 was one of three constructed in the 1870s and was then rebuilt in its current form with two passenger compartments during 1920/21. My model is another scratchbuild. 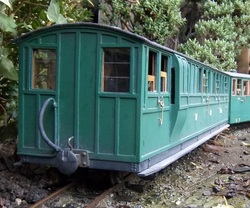 Two of theses versatile vehicles entered service on the NWNGR in 1907, later being cut-down for further use on the Welsh Highland. There were only minor differences between the two and my model may be closer to number 9 - further research is required , but since no number is actually carried it doesn't matter greatly.

See here for a detailed account of how the model came together.

Scrapped almost 30 years before the Welsh Highland came into being, three of these little 4 wheelers date from the earliest days of the NWNGR but were incredibly camera shy, appearing in just one known photograph. I've re-written history so that these two can run on the Clarach branch having been retrieved from the depths of Dinas carriage shed... The models were created by teaching  myself some simple CAD to create a set of drawings for laser cutting - there was no way I was going to try to replicate all those curves with just a Stanley knife!
Powered by