The goods wagon fleet has grown a great deal in recent years, to the point where I can now operate a variety of reasonably authentic Welsh Highland goods trains. There are number of Ffestiniog wagons too, which often operated over the old Welsh Highland line.

I'm trying to create appropriate wagons for each type of traffic represented on the railway.

Like most narrow gauge lines in Wales, slate was the Welsh Highland's raison d'etre, even if it never carried nearly as much of it as it might have liked. Slate traffic is currently catered for by some scratchbuilt WHR "box" (i.e. conventional open) wagons, two Coopercraft Croesor Tramway iron-bodied wagons (lettered for the fictional Clarach Quarry), and a variety of  wagons "borrowed" from the Ffestiniog. The latter include a rake of five scratchbuilt two ton examples, the construction of which are described here.

Coal seems to have accounted for a significant proportion of the Welsh Highland's goods traffic. On the Clarach branch it is handled by this pair of scratchbuilt 4 ton open wagons, two former WW1 D Class wagons, "box" slate wagons, and a Ffestiniog coal wagon built from a Phil Sharples kit. 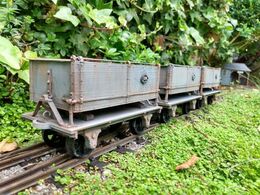 The real NWNGR carried some granite, a small traffic flow which may have carried over into WHR days. Happily, the fictional granite quarry at Penlan seems to churn out enough to keep a number of wagons usefully occupied, including this trio of Ffestiniog tipplers built from parts designed and 3D printed by a friend. 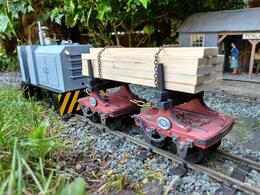 Timber seems to be another NWNGR staple (particularly during WW1) that had dwindled by WHR days. That's probably a good thing, because the only wagons I have to carry it is this pair of Ffestiniog bolster wagons built from a Lineside Hut kit. To rectify this, I plan to construct models representing of a pair of WHR bolsters and the bogie flat wagon that was converted from a brake carriage. 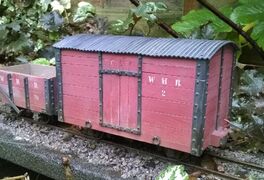 Flour, perishables and other general goods

​Porthmadog's flour mill had its own siding and distributed its good by rail, some of heading up the Welsh Highland, along with beer for the pubs and hotels and other general goods. I've only modelled one of the WHR's distinctive corrugated roofed vans so far, but its capacity is supplemented by a scatchbuilt van from the FR and a model of that line's one plank "beer wagon" built from a Phil Sharples kit.  A model of the van converted for the conveyance of meat and/or milk will follow at some point. 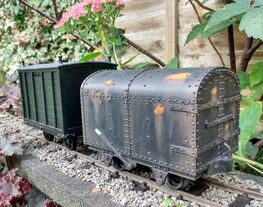 The (Windmill Hill) Welsh Highland Railway borrows wagons from the Ffestiniog to carry gunpowder to the mines (in a Swift Sixteen kit) and, occasionally, deceased miners away again, in a Timpden Models hearse van. A scratchbuilt model of the FR's brine tank wagon caters for those wishing to benefit from that particular health treatment. 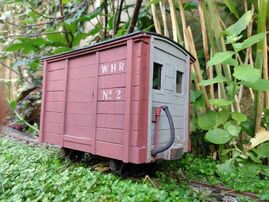 ​Bringing up the rear is this scratchbuilt model of the Welsh Highland's vacuum-braked van 2, supplemented by WHR Van 4 and Ffestiniog Van 5, both dual braked and converted from quarrymen's carriages - Brandbright kits, in my case. 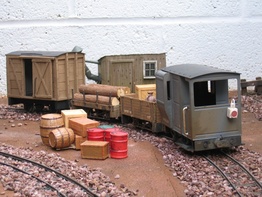 With the Welsh Highland and Ffestiniog wagon fleet now numbering over 30 wagons, the old West Kent Light Railway wagons get far fewer outings than they used to, but still see occasional use, particularly during the plum and apple harvests, when all available open wagons might be be pressed into use.