Along the Line
The (Windmill Hill) Welsh Highland Railway represents the line's Clarach Branch. That never really existed, of course, but it's a way to try to capture something of the old Welsh Highland in our little back garden. The line is an end-to-end route curving around the edge of the garden, climbing as it goes so that the upper terminus sits around 18" above the lower one. I'm gradually adding more identifiably WHR features in an effort to enhance realism and atmosphere. 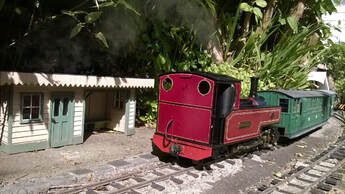 Our journey begins at Trefechan. The station building here, scratchbuilt from foamboard and based on the classic 80s Hornby "OO" design, is the third so far and will itself be replaced at some point by a brick and stone structure based on NWNGR designs.

​In my imagination the line continues from here to a junction with the Welsh Highland main line - in reality it comes to an abrupt halt underneath the buddleia. 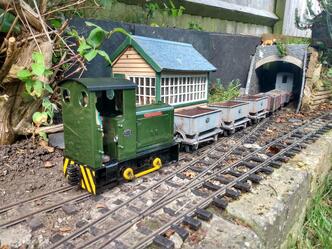 On leaving the station the line dives straight into Trefechan Tunnel - so soon in fact that manually-controlled engines can need to run all the way through the tunnel when running round their train in order to allow their driver access to the controls!

The tunnel mouth and signalbox are scratchbuilt in foamboard, the latter based in the one that once stood at Tryfan Junction. My line is set in the 1920s, when there were no longer any signals to control, so the 'box is now an aviary for the stationmasters canaries - as the original once was... 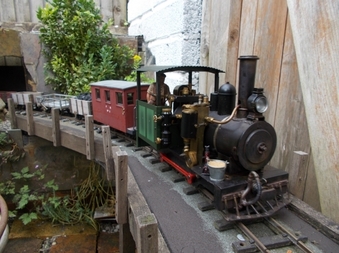 ... and Regner Daisy, emerging from the other end and passing the back gate... 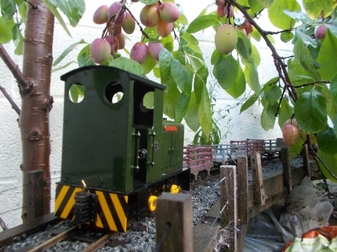 After a fairly unspectacular run along the back wall trains reach "Leach's Curve", a wooden structure (almost hidden from view by potted plants on the patio) arcing round in front of the plum tree - seen here ready for harvest. Its name comes from my mate Mark's surname - he helped out with the relatively complex carpentry required to build this section of line. 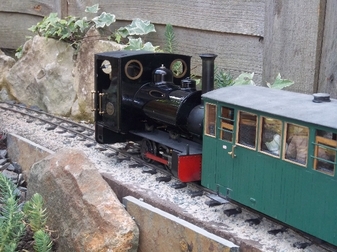 Our journey now takes us through "Vicarage Cutting" - the stone it's made room was donated by some friends who live in an old vicarage and were having some work done in their garden.

Here's Jonah drifting downhill with the Buffet Car in tow... 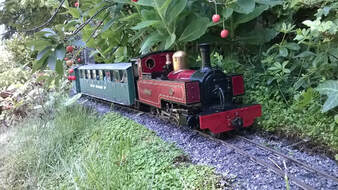 Penlan Bank  is one of the more attractive parts of the line and one where the 1 in 50 gradient and reverse curves (inspired by the real Welsh Highland) really make the engines work hard - those fitted with "chuff pipes" sound particularly good heading uphill on this section.

In this view Russell heads a typical Welsh Highland train up the bank and under the cherry tree - alas, the cherries taste horrible... 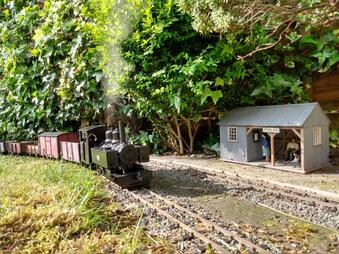 Penlan station is the line's midpoint and boasts a passing loop enabling trains to pass here. The station is another foamboard structure, and is based on the Welsh Highland original which once stood at Nantmor. In this scene, the Baldwin is just arriving with a goods train. 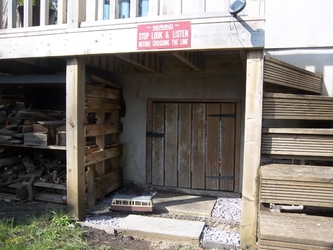 Above Penlan the scenery is a little sparse - it's a small garden and the railway has to fit in with its other uses and users. With that in mind there are parts of the line that are pretty functional, like this crossing under the deck which allows access to the storage area under the house - note the genuine "Stop Look and Listen" sign though! The house has been painted a fetching shade of pale blue since this photo was taken... 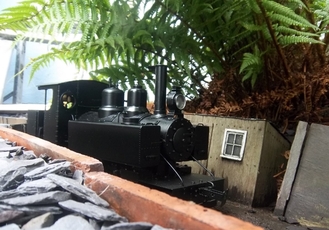 Spider Cutting - named for the friendly little arachnids that like basking on the sunny walls of the Permanent Way hut and cutting  - is another of the more functional sections of the line, curving out from beneath the deck only to dive under the swing sofa. 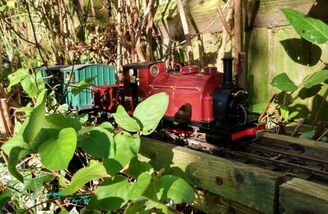 The final straight climbs through the bushes behind Trefechan on a sturdy but not very elegant wooden structure - here's Palmerston bursting into a patch of sunshine during one of its first runs on the line. 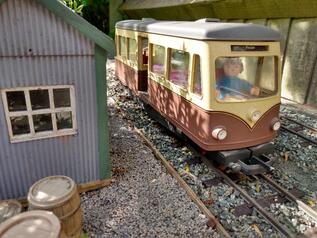 Clarach station is the end of the line. Quite why anyone would want to travel here is a little unclear, although the railcar driver in this picture seems pretty pleased to have arrived.

The station building is a Pendle Valley Workshops resin model of the shelter at Sylfaen on the Welshpool and Llanfiar Railway - not a genuine WHR structure, but it fits the very limited space and has a certain family resemblence to the corrugated buildings used south of Beddgelert on the real railway.

There's still lots to do here, including more scenic work and a model of one of the McAlpine concrete water towers to refresh engines after their climb.
Powered by