Progress in the Garden 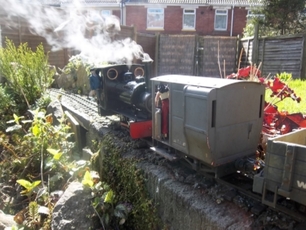 WKLR  No 3, "Jonah" had been out of service since I messed up the valve timing whilst carrying a cosmetic makeover. That and a couple of other issues were finally resolved with a trip to Tony Wilmore's Rhos Helyg Works, and it's now running beautifully, as seen here. The expansive view was short-lived and had come about due to a missing fence panel, now repaired... 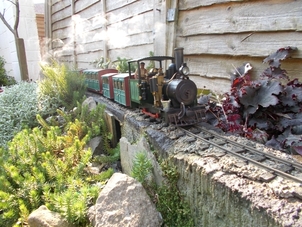 Here's WKLR No 3, "Daisy", partway through her cosmetic overhaul and pulling the first passenger train of 2015, consisting of the railway's Ffestiniog carriages. All went well and the carriages behaved themselves nicely on the re-laid track - we're off! 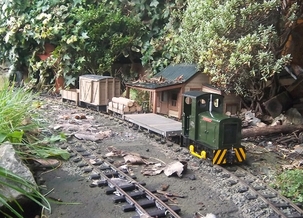 The winter saw various improvements carried out, including  three sections of line which were completely re-laid. The sections in question were curves which weren't as consistent as they might have been, each featuring a tight spot which was causing derailments. All have been rectified and tested and are now ready for ballasting. The photo shows the Roundhouse diesel with a typical winter works train trundling through a distinctly untidy-looking Penlan. 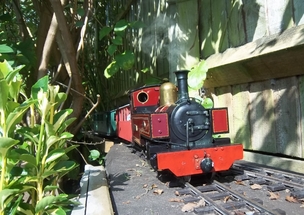 This year has been the first that trains have run over the whole length of the (Windmill Hill) Welsh Highland Railway. The season's trains have run well on the whole, but have also highlighted areas that need further work before next year, mostly improvements to the trackwork. To allow for these works, and to let the newly-sown grass seed grow over the bare patches of the lawn near the termini, regular trains have now stopped - the photo shows Russell and train in the Autumn sunlight during the last running session of the year.
Powered by